Below is a rough guide to trigonometry mostly borrowed from Wikipedia. Probably the easiest way to learn trig is through some of the excellent online instructional videos out there, which take you through all the material in baby steps. Below is a video from YouTube user KhanAcademy If you’d like an excellent series of instructional videos in mathematics, I highly recommend checking out this guy’s videos and website.

For more educational resources be sure to visit http://www.khanacademy.org/ 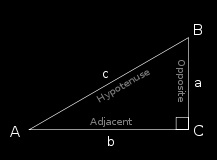 If one angle of a triangle is 90 degrees and one of the other angles is known, the third is thereby fixed, because the three angles of any triangle add up to 180 degrees. The two acute angles therefore add up to 90 degrees: they are complementary angles. The shape of a right triangle is completely determined, up to similarity, by the angles. This means that once one of the other angles is known, the ratios of the various sides are always the same regardless of the overall size of the triangle. These ratios are given by the following trigonometric functions of the known angle A, where a, b and c refer to the lengths of the sides in the accompanying figure:

With these functions one can answer virtually all questions about arbitrary triangles by using the law of sines and the law of cosines. These laws can be used to compute the remaining angles and sides of any triangle as soon as two sides and their included angle or two angles and a side or three sides are known. These laws are useful in all branches of geometry, since every polygon may be described as a finite combination of triangles. Graphs of the functions sin(x) and cos(x), where the angle x is measured in radians.

The above definitions apply to angles between 0 and 90 degrees (0 and p/2 radians) only. Using the unit circle, one can extend them to all positive and negative arguments (see trigonometric function). The trigonometric functions are periodic, with a period of 360 degrees or 2p radians. That means their values repeat at those intervals. The tangent and cotangent functions also have a shorter period, of 180 degrees or p radians.

A common use of mnemonics is to remember facts and relationships in trigonometry. For example, the sine, cosine, and tangent ratios in a right triangle can be remembered by representing them as strings of letters, as in *SOH-CAH-TOA:

Also used is its reverse, OHSAHCOAT (pronounced oh-sah-coat). It is interpreted as OHS-AHC-OAT, as shown below.

One way to remember the letters is to sound them out phonetically (i.e. “SOHCAHTOA”).[13] Another method is to expand the letters into a phrase, such as “Some Old Horses Chew Apples Happily Throughout Old Age”.[14]

Trigonometric functions were among the earliest uses for mathematical tables. Such tables were incorporated into mathematics textbooks and students were taught to look up values and how to interpolate between the values listed to get higher accuracy. Slide rules had special scales for trigonometric functions.

Sextants are used to measure the angle of the sun or stars with respect to the horizon. Using trigonometry and a marine chronometer, the position of the ship can be determined from such measurements.
Main article: Uses of trigonometry

There are an enormous number of uses of trigonometry and trigonometric functions. For instance, the technique of triangulation is used in astronomy to measure the distance to nearby stars, in geography to measure distances between landmarks, and in satellite navigation systems. The sine and cosine functions are fundamental to the theory of periodic functions such as those that describe sound and light waves.

Identities are those equations that hold true for any value. 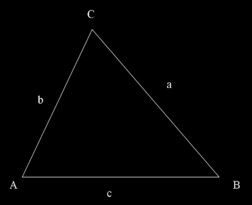 Triangle with sides a,b,c and respectively opposite angles A,B,C

The law of sines (also known as the “sine rule”) for an arbitrary triangle states:

where R is the radius of the circumscribed circle of the triangle:

Another law involving sines can be used to calculate the area of a triangle. Given two sides and the angle between the sides, the area of the triangle is: 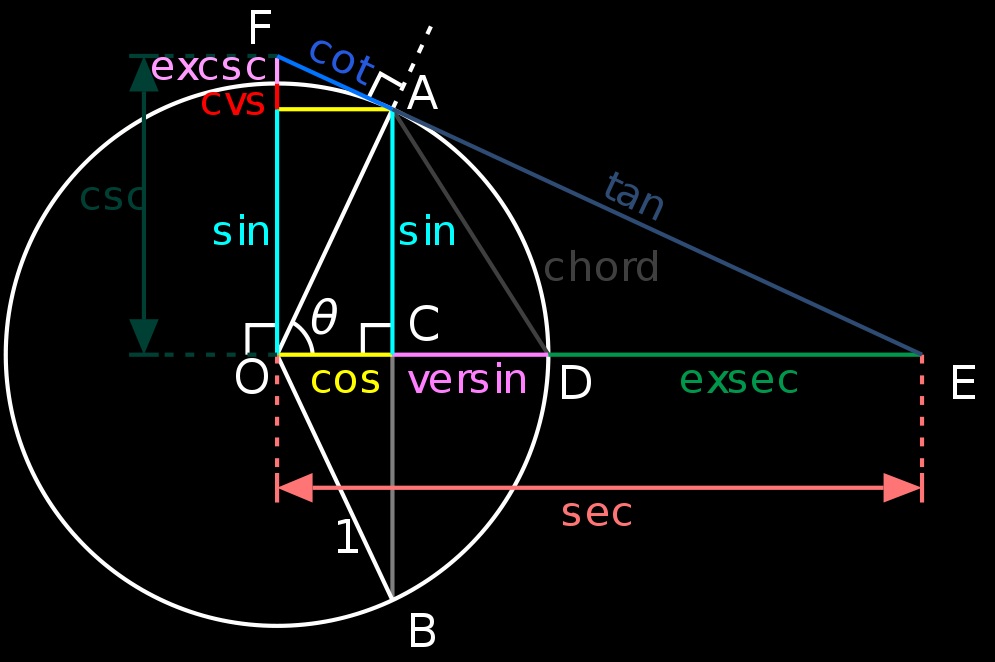 All of the trigonometric functions of an angle ? can be constructed geometrically in terms of a unit circle centered at O.

The law of cosines (known as the cosine formula, or the “cos rule”) is an extension of the Pythagorean theorem to arbitrary triangles:

The law of tangents:

Euler’s formula, which states that eix = cosx + isinx, produces the following analytical identities for sine, cosine, and tangent in terms of e and the imaginary unit i: