Aurora was a mid-1980s American reconnaissance aircraft development project, that did a large amount of research into triangular shaped aircraft including the B-2 Advanced Technology Bomber (the one that uses the gravito-electric T.T. Brown Effect for additional lift), The SR-91, The SR-75 Penetrator, and the TR-3B Astra or TR-3 Black Manta.

The U.S. government has consistently denied such an aircraft was ever built. Aviation and space reference site Aerospaceweb.org concluded, “The evidence supporting the Aurora is circumstantial or pure conjecture, there is little reason to contradict the government’s position.” Former Skunk Works director Ben Rich confirmed that “Aurora” was simply a myth in “Skunk Works”, a book detailing his days as the director. Mr. Rich wrote that a young colonel working in the Pentagon arbitrarily assigned the name “Aurora” to the funding for the B-2 bomber design competition and somehow the name was leaked to the media.

Ed Fouche also mentioned that some of the experiments took place at Buckley Air Force Base which it turns out, is in Aurora, Colorado. Could the The name of the Aurora Project have been linked to it’s location in Aurora, CO? Only time and further government declassifications will tell…

Others come to different conclusions. In 2006, veteran black project watcher and aviation writer Bill Sweetman said, “Does Aurora exist? Years of pursuit have led me to believe that, yes, Aurora is most likely in active development, spurred on by recent advances that have allowed technology to catch up with the ambition that launched the program a generation ago.”

Given the testimony of former Area 51 Employee Edgar Fouche, the Aurora Project was an Above Top Secret military project, tasked with producing a high altitude reconaissance platform which produced several aircraft including the TR-3B, SR-75, and the B-2 Advanced Technology bomber. Ben Rich would of course have every reason to deny such a program and it very may well have existed in this capacity. 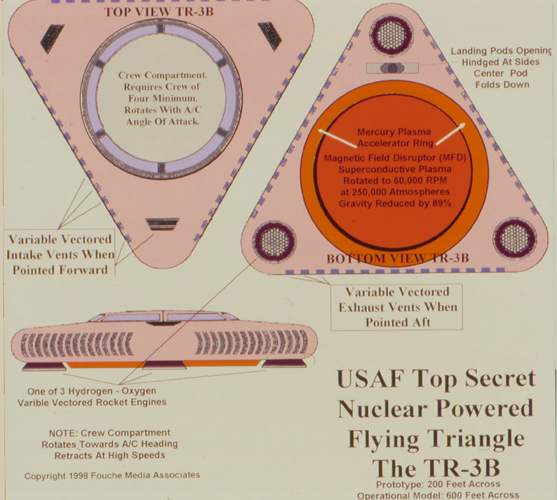 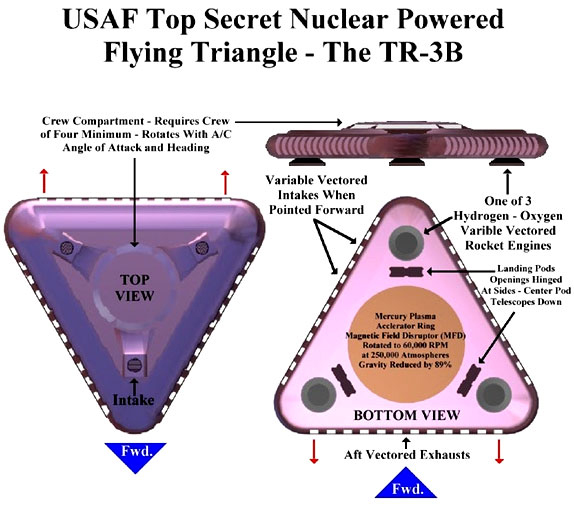 The TR-3B and Flying Triangles

The TR-3 Black Manta is the name of a surveillance aircraft of the United States Air Force, speculated to be developed under a black project. The only known confirmed evidence for such an aircraft is based on speculations about several reported sightings of mysterious flying wing aircraft over Antelope Valley, an area of desert in southern California. This stretch of desert draws people interested in potential “black project”-related aircraft, because it is close to several known military research and testing areas, such as Edwards Air Force Base in California, and United States Air Force Plant 42

The TR-3 was said to be a subsonic stealth spy plane with a flying wing design. It was alleged to have been used in the Gulf War to provide laser designation for Lockheed F-117 Nighthawk bombers, for targeting to use with laser-guided bombs. The TR-3 was claimed to have been manufactured by Northrop.

How the TR-3 designation came up in publications is unclear. It is clearly not a continuation of the R-for-Reconnaissance series, since ER-2 (NASA designation for U-2 aircraft modified for Earth science studies) stood for “Earth Resources”, not “Electronic Reconnaissance”. It is, therefore possible that TR-3 is merely a corruption of Tier III, a name given to a cancelled large reconnaissance unmanned aerial vehicle (UAV) flying wing designed around the time of alleged sightings of the Black Manta, circa 1988–1990. The Tier III Minus program that resulted in the unsuccessful Lockheed Martin RQ-3 DarkStar was a scaled-down derivative of the original Tier III.

Because there is little evidence to support TR-3’s existence, only sightings and “experience” stories by real people and also the web discussions on it, it is possible that the mysterious flying wing sightings associated with Black Manta could be a technology demonstrator for a potential new-generation tactical reconnaissance aircraft. This contention is supported by United States Air Force (USAF) sources in the late 1980s confirming that the United States had no short-term plans to develop a low-observable U-2 successor.

Another candidate for the alleged spy plane is a design from Teledyne Ryan, patented in the United States on April 26, 1977, under number 4,019,699. This aircraft of low observability, as it is called, was invented by Robert W. Wintersdorff and George R. Cota, employees at Teledyne Ryan, a firm specialized in building unmanned reconnaissance aircraft. On May 10, 1977, a design of an aircraft was patented by Teledyne Ryan under number Des. 244,265, and closely resembles the earlier mentioned example. This design was made by Waldo Virgil Opfer. The first design is unmanned, the second one manned. Whether one of these designs is related to the above-mentioned TR-3 is not positively identified, but it is a coincidence that TR also stands for Teledyne Ryan. Teledyne Ryan was acquired by Northrop Grumman in 1999.

Here are some additional images which were slides taken from former Area 51 Employee Edgar Fouche’s 1998 presentation: 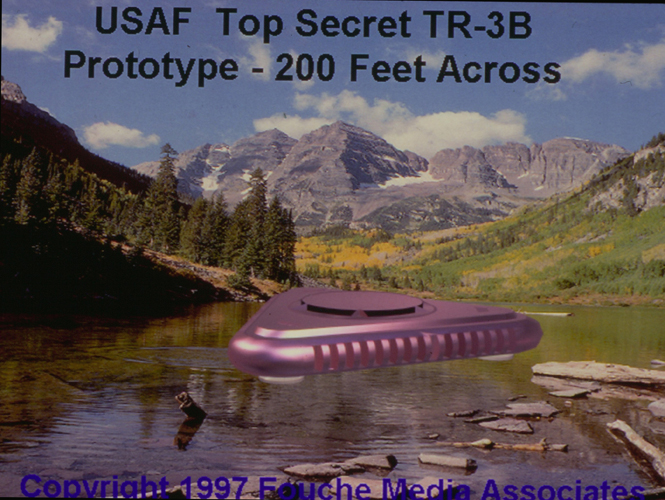 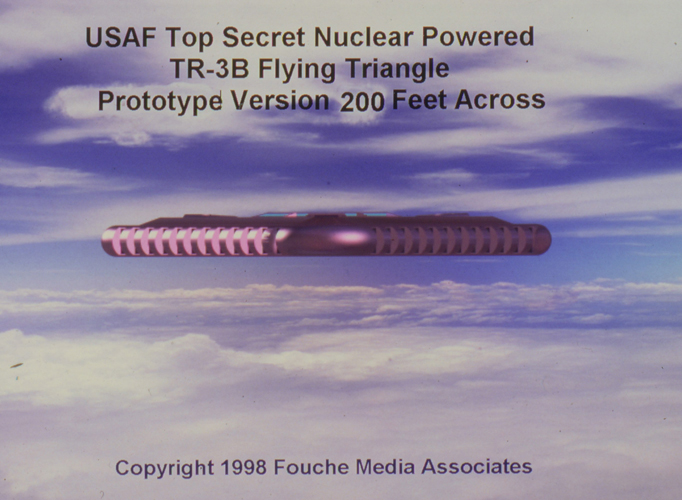 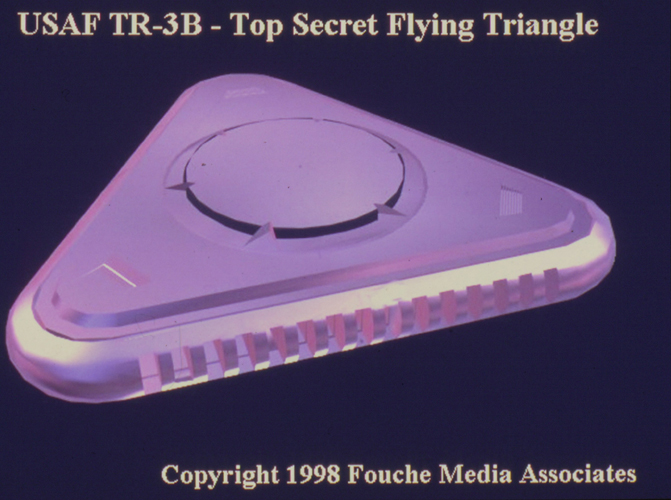 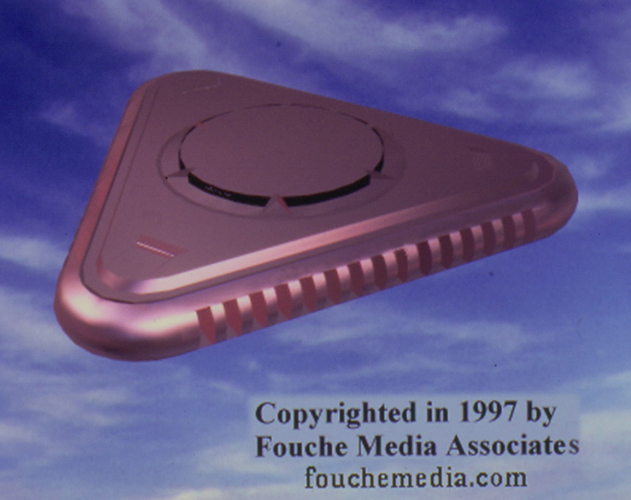 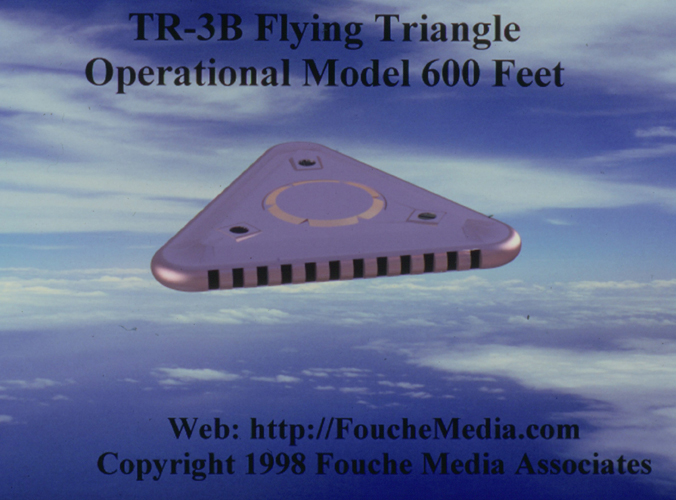 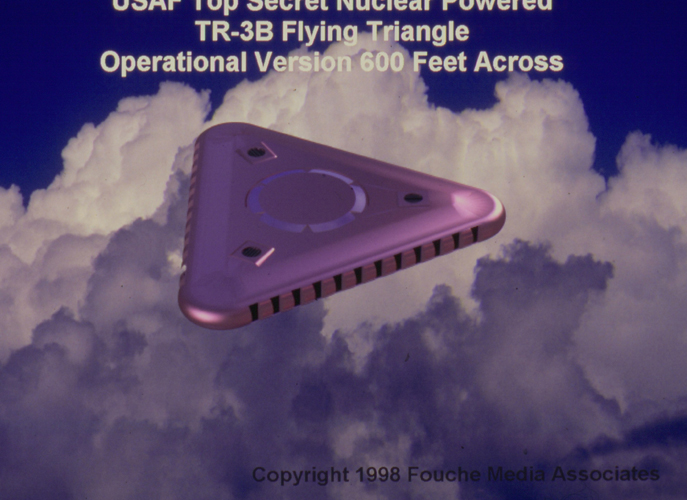 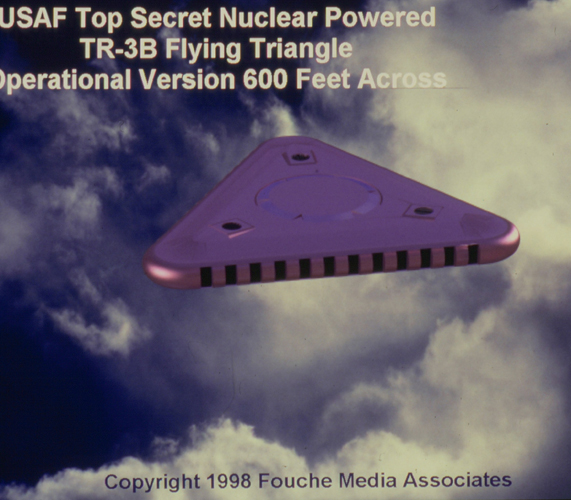 “Antigravity Not So Crazy After All”

It is now nearly 10 years since Henry Wallace was granted a pair of US Patents (# 3,636,605 and 606) on what was initially written off as a crazy science fiction notion — a machine to generate an anti-gravity field. But in the interim, Professor Eric Laithwaite of Imperial College, London, has achieved both fame and notoriety by arriving independently at a similar theory.

According to Wallace’s patents, bodies made of carefully chosen materials generate an energy field when placed in rapid relative motion. This field is not electromagnetic and was christened by the inventor as a Kinemassic Forcefield. If this kinemassic field is made to undulate, a secondary gravitational field is produced which can neutralize gravity.

In one kinemassic machine a pair of wheels of brass alloy, like gyroscopes, are mounted in close-fitting air gaps between massive structural supports formed from steel. The wheels are driven to a high speed of rotation by jets of compressed air or nitrogen. The inventor claims that, at speeds of about 20,000 rpm, polarization of the spin nuclei of the alloyed metal occurs. If one wheel is balanced on a knife edge, it will start to oscillate under the influence of the other. If the spinning wheels are rotated abut another axis, a secondary gravitational field is created which reduces the wheels’ weight. If a sufficiently strong field is created, it can generate localized areas of gravitational shielding and thus provide an effective propulsion force.

Although the Wallace patents were initially ignored as cranky, observers believe that his invention is now under serious but secret investigation by the military authorities in the USA. The military may now regret that the patents have already been granted and so are available for

According to Pokletnov the physics of his experiment was about more than just rotating superconductors… There was a LOT more physics going on.

Pay attention to the bilayering of the disc, and the pulsed electrical discharge:

Note: Not shown is the bilayer in the superconductor or the applied frequency…
See: https://www.researchgate.net/publication/222897740_Gravity_modification_experiment_using_a_rotating_superconducting_disk_and_radio_frequency_fields

Can Podkletnov Effect be explained by Quantized Inertia (aka Cassimir Effect in the bilayer)?
https://arxiv.org/pdf/1108.3488.pdf

2013 Military.com came out with an article nearly admitting that they have flying triangles:

Are they prepping us for the big release? UFO spotted over Top Secret Military base in Oregon.

Could it have been a blimp?

The hunt for the TR-3B continues…

Contribute to Something Extraordinary