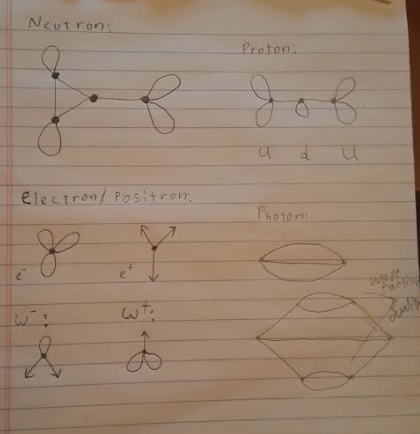 Here is a map showing the visual “knot” structures of PhOENIX and how they relate to the fundamental particles in physics, such as quarks, leptons, hadrons, baryons, photons, etc. as closed-loop knots.

Photons are interpreted as a connected point of information exchange between two vertices. Leptons are single vertex particles, while Hardrons and Baryons are bundles of 3 or more vertices entangled together.

Anti-matter looks like the same as matter only the loops are replaced with arrows… and this is what leads us to the topological conclusion that antimatter is the key to quantum disentanglement. Because it will isolate and close all the particle loops inside of a bubble surrounded by this special type of quantum-topological landscape of antimatter also called “Dirac Hole” structures.

According to PhOENIX theory, antimatter is the key to shutting off quantum entanglement and closing off those loops, and if quantum entanglement is the key to gravity, than this should also shut off gravity. It also gives us the “Negative Energy State” solutions to the Alcubierre-White Warp Drive Theory required to build warp drive technology. It’s a worthy idea that has never been tested and is absolutely worth a try.

The leading physics journals in just the past few years, are all leaning towards that idea that quantum entanglement causes gravity, as no evidence can be found for the graviton.

It is our belief that we are on the verge of a major scientific breakthrough in physics, and we want to be on the cutting edge of that discovery, and the amazing technologies that will be brought to life from this deeper understanding of the core of physics.

The following video is part 1 of a series made by Ken in 2012 to explain and put forth his theory.

01 Introduction to PhOENIX: the Principle of Existence https://www.youtube.com/watch?v=U6DsSXP5UQo

02 Introduction to PhOENIX: the Particles of PhOENIX https://www.youtube.com/watch?v=wOrRbXXMF8o

03 Introduction to PhOENIX: the Particles of PhOENIX, part 2 https://www.youtube.com/watch?v=TBlFjeW7AGU

04 Introduction to PhOENIX: the Photons of PhOENIX https://www.youtube.com/watch?v=UNjTssLr38s