Boyd Bushman claims this information was fed to him through sources deep inside Area 51, but who exactly were these “Sources”? and why does so much of this “New Information” look like the same old disinformation about UFOs and Aliens inside Area 51 we’ve been hearing about for years? 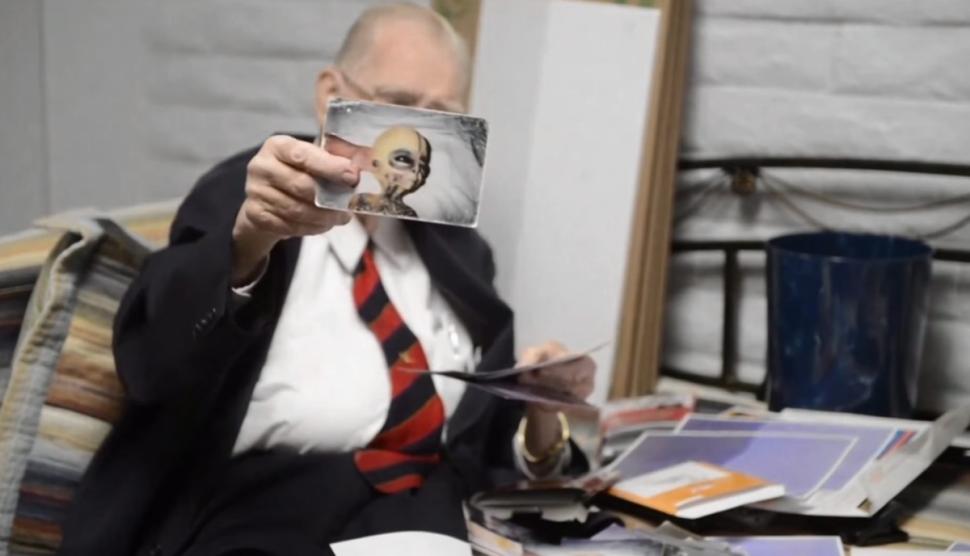 Rumors about Aliens working inside Area 51 have been common since the early days after World War 2, when Military Intelligence (or Counter-Intelligence) began spreading UFO and Alien stories to confuse and discredit locals who had accidentally witnessed the test flights of experimental top secret aircraft being built, flown, and tested at Area 51. The rumors proved effective at distracting the public and distorting any information they might provide to foreign intelligence agencies or other members of the public.

So… there are lots of good reasons to be skeptical about the claims being made about aliens in this interview as well as the sources of that information. We’ll start with the photographs Boyd Bushman provides which he claims are pictures of a real alien being. 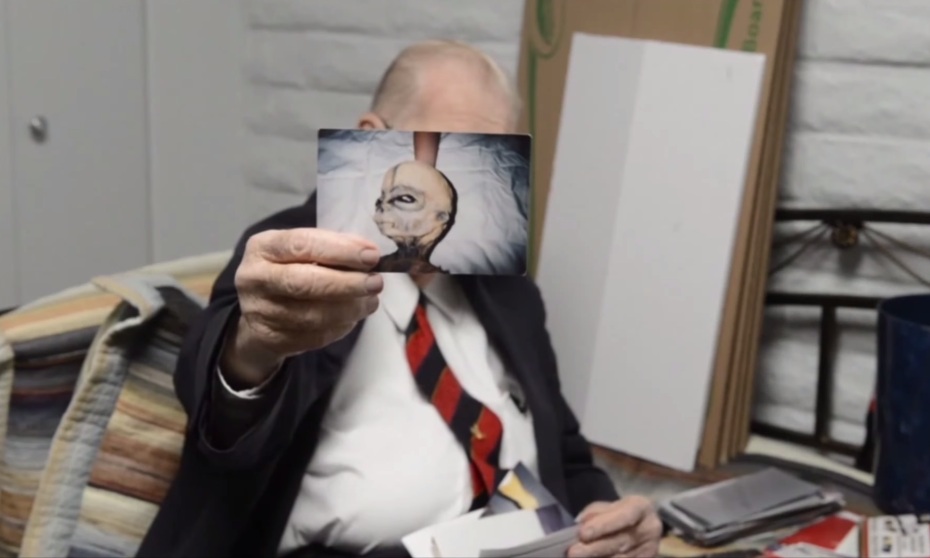 These photographs originally surfaced in 2009, when John Hutchison posted a video capture of the photoraphs to his YouTube Channel. John gives hints about his source for the information in this video, but does not name Boyd Bushman by name… Watch the video here:

We are still unsure who first provided these photographs to Boyd Bushman telling him they were photos of a real alien being inside Area 51… But subsequent investigations have determined that the alien in the photographs is actually a doll sold by KMart stores ( item# 301330309572 )… Here are some pictures and videos of the doll: 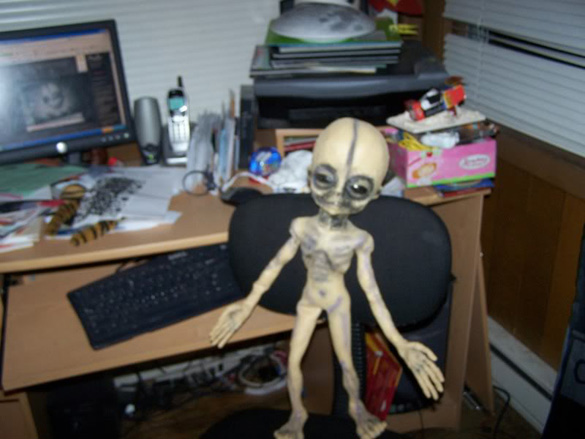 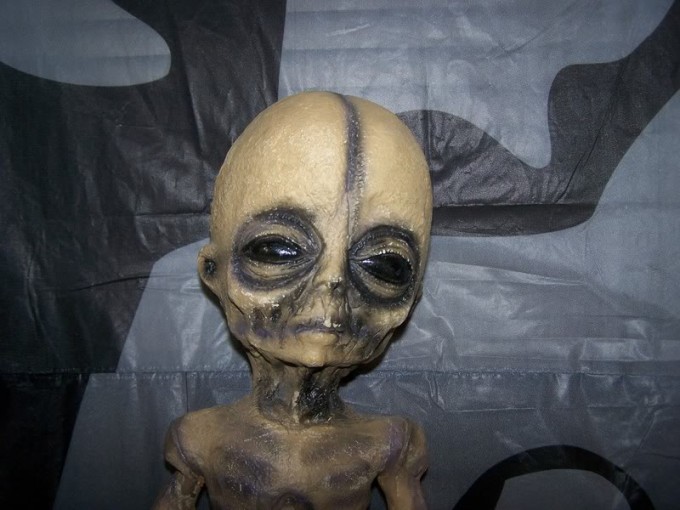 The following video was posted on Nov 8, 2008 by YouTube user JonnOfMars (*Not John Hutchison) several months before I first heard the story from Richard Heene aroumd April or May 2009… It’s likely that more than one of these dolls was produced and exists out there, and that whoever first provided these fake photographs to Boyd Bushman probably used a similar doll to stage the photos.

So it’s a bit disappointing that the most crucial piece of evidence provided by the late Boyd Bushman’s in his entire death bed confession is such an obvious fraud… As a scientist, I have been likewise disappointed with the quality of information, data, and evidence that Boyd Bushman has provided over the years. I really expected more from a senior scientist at Lockheed Martin who claims he had high level inside sources feeding him information. In my personal opinion, these “Sources” were either hoaxers or disinformation agents.

In the interview Bushman even provides paperwork of 500 drop test experiments conducted from a height of 59 feet at a location in (White Settlement?) Texas on December 12, 1995. The document is not very clear in the video, but the words “ANTI-GRAVITY” are visible in the top left corner as well as the words “AT LMTAS” (aka AT Lokheed Martin Tactical Aircraft Systems) where Boyd claims the experiments were conducted.

Since real science isn’t concerned with the details or results of these tests by Lockheed Martin, and only cares whether these results are replicable or not… I’d like to encourage everyone to try this experiment themselves and post their own results and data! I will be conducting and posting video of my own replication experiments shortly…

In 2009 William Alek conducted a magnet drop experiment where he claimed to have positively replicated Boyd’s finding, Although he received criticism for conducting only one test, and releasing the objects by hand rather than with a trap door mechanism. All in all, I agree that much more thorough testing needs to be done to eliminate all sources of error from the expirment, and make sure that no one is fooling themselves.

In addition future experiments should try to measure the magnitude of opposing magnetic forces within the object, and compare that to the reduction in the natural acceleration of gravity, to find a relation between the two and thereby allow us to figure out the forces required to negate gravity altogether. (If indeed this even works at all…)

This is another clip from Boyd’s 2003 interview with David Sereda, where he endorses John Hutchison’s claims of Anti-Gravity, claiming the effects are derived from high voltage electrostatics.

As a scientist, I am not persuaded by any such claims until I can reproduce them myself in my own laboratory under a similarly prescribed set of conditions. While I have seen first hand the effects of high-voltage electrostatics on light weight object such as “lifters”, and done some of my own research into the Biefeld-Brown Effect, I have not seen evidence that the effect is strong enough to lift heavy steel cannon balls like the object shown in the Hutchison video. In my opinion this effect can be much more easily generated by affixing a camera to a box with a cannon ball inside of it, and then dropping the box down an elevator shaft, so it gives the appearance of the ball becoming weightless inside. The same would also work quite effectively for the milk shake / ice cream as well, giving the illusion of anti-gravity.

In the past I have exposed some of the serious problems with John Hutchison’s various scientific claims, his lack of technical knowledge and explanations, as well as the complete inability of anyone else besides him to replicate any of his experiments in a controlled scientific setting. Until precise data and information is provided on exactly how to replicate these effects, and until those replications are successfully conducted, I will have to conclude that this is just another hoax that Boyd Bushman fell for hook, line, and sinker! (Just like that KMart Alien… XD)

In another clip from Boyd’s 2003 interview with David Sereda, he pawns off the stoy of Bob Lazar as a legitimate source for information regarding Area 51 and Antigravity Technology, claiming that the Bob Lazar tapes are as “far as I can talk”…

Having done my own extensive investigation into Bob Lazar and his scientific claims, and found no evidence for a “Stable isotope of Element 115” never mind one that has Anti-Gravity and trans-mutation effects as Bob Lazar has claimed in the recorded interviews he gave between 1989 and 1993… I’ve pretty much proved beyond any reasonable doubt that Bob Lazar is very definitely NOT who he says he was, that he did not actually attend CalTech or MIT, is not a real physicist, and basically just knows enough about science in order to baffle uneducated people with technical sounding bullshit.

Judging by the content and validity of the data that Boyd Bushman has provided us over the years regarding Area 51, and Anti-Gravity technology, It’s evident that Boyd’s Sources were invididuals within the UFO / Alien / Conspiracy community, and not actual aerospace employees, high ranking scientists, or other insiders from Area 51 / Lockheed Skunkworks…

Over the years Boyd Bushman endorsed a variety of publicly available information regarding Anti-Gravity Technology, much of which remains unauthenticated or has otherwise been proven false.

Whoever provided Boyd Bushman with alleged photographic evidence of UFOs, Anti-Gravity craft, and Alien Beings inside of Area 51, obviously used pictures of an Alien doll purchased at KMart ( item# 301330309572 ), thereby drawing into question the validity of all the other photographs provided to Boyd Bushman through this same source of information. This anonymous source was most likely a con artist conducting a hoax at the expense of the late Boyd Bushman.

Any other claims, data, or other information that I may have missed or that you’d like me to address please contact me through my AlienScientist facebook page