AlienScientist’s personal comments on this case: It would appear that the game is on to mislead, distract, confuse, and most importantly Divide the “Truth” Action political movements gaining a foot hold across the internet. And this is their new game. Every time a new major event happens, out come this army of “Conspiracy Theorists” coming out with the most bizarre crackpot nonsense you can imagine… Every new event is “completely staged” or “faked”. The media love to popularize these bizarre theories as well, because it makes all conspiracy theories look stupid or unrealistic by association, and they can just dismiss cases like JFK or 9/11 by saying “oh there are always conspiracy theories after every major event you know…” These theories have been instrumental in destroying the Truth Movement and delegitimizing a new 9/11 Investigation.

(Material he adapted from several sources including Rational Wiki

Crisis actors are supposedly professional actors used by government agencies and/or the mainstream media to deceive the public with portrayals of trauma and suffering. Specifically, they act as victims or witnesses in staged school shootings or hoax terrorist attacks. Needless to say, this sort of thing actually goes on only in the minds of denialists and conspiracy theorists.

Although “crisis actors” are a real thing used for disaster drills, and there are real companies that supply them, the use by conspiracy theorists is significantly different.

The term was popularized in early 2013 after Professor James Tracy of Florida Atlantic University, who has a history of promoting anti-government paranoia, attracted some media attention for blog posts claiming that the media coverage of the Sandy Hook massacre of December 2012 had been misleading. Tracy claimed that the many witnesses interviewed or photographed by the press were actually “crisis actors” portraying the “official story” as part of a cover-up of whatever did or didn’t actually happen.

Use of the phrase “crisis actors” quickly spread within the clogosphere, becoming popular with conspiracy theorists who queried or denied the accepted accounts of Sandy Hook and other crises such as the Aurora shootings of July 2012. The concept has obvious crank appeal, allowing easy explanations for the huge volumes of film footage, photographic evidence and eyewitness testimony surrounding such events

Disturbingly, some of these assholes took to naming and harassing individuals whom they perceived as possible crisis actors. Ordinary citizens who had been interviewed at Sandy Hook, or done what they could to help survivors and the distraught community, found not only their media interviews but their private lives and Facebook profiles under hostile scrutiny and their privacy invaded with aggressive telephone calls and hate mail. Most famous is the case of Gene Rosen, a local resident who, on the day of the Sandy Hook massacre, had looked after six children who fled the school. He was interviewed many times during the media coverage of the shootings. As the Sandy Hook “truther” movement picked up momentum, Rosen quickly became identified by various bloggers and conspiracy pundits as a crisis actor, and suffered sustained campaigns of online and real life harassment. 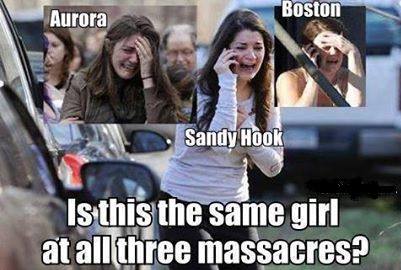 Here’s a clue: no. Another case of mistaken identity.